Scary Predictions for drought in parts of the U.S. 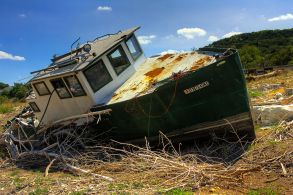 It seems that recent scary predictions for drought are on everybody’s mind these days, at least among many followers of my twitter account. I get reactions from California, Brazil, Australia, or the Middle East about the impact of drought on our daily lives. One of the reasons why I prefer to get most of my news through Twitter is its function as an independent barometer of what keeps us busy these days. The number of retweets of an article, and the number of favorites that a tweet gets, are a good indicator. But it is mainly the combination with the personal comments and experiences of my followers that makes the information more valuable than just reading magazines or newspapers.

And now there is this new NASA study. It predicts that droughts in the U.S. Southwest and Central Plains at the end of this century could be drier and longer compared to drought conditions in those regions in the last 1,000 years. Severe droughts like the Dust Bowl in the 1930s lasted only about a decade or less, but this study and several other projections warn us for a much more extended drought period that might last more than three decades.

Drought in the American Southwest

I remember reading about the social impact of that 1930s drought in James Michener’s book Centennial. I read it at high school; in fact, it was the first significant volume book that I ever read in English. I must have been about fourteen or fifteen years old, and it shaped my view of the United States. It is the history of a fictional town, close to the South Platte in Northern Colorado. I still remember 35 years later the chapters about the 1930s. A young family desperately tried in vain to survive the severe drought. And the maddening wind never stops to blow around their small isolated farm.

A boat in central Texas

A few years after I had read about the dustbowl years, I visited the U.S. for the first time. I got off the bus with my backpack in Albuquerque on the day that I turned 21. For a Dutchman, the summer in New Mexico is already sweltering hot and dry, but it was there that I read for the first time about the terrible Great Drought in the 12th and 13th centuries. Those much warmer and dryer decades may have contributed to the collapse of the Anasazi people.

Experiencing the New Mexico August heat myself, I could easily imagine a complete culture collapsing under even warmer temperatures and drought. I have lost the book that I bought about the theories of Anasazi history and the impact of the Great Drought. But somehow, I kept my T-shirt with Anasazi drawings; I still use it for jogging. The book that I bought would be out of date by now; Anasazi archeology experiences a quiet revolution. No more talks about the Great Droughts, scientists believe that there must have been other and more complex reasons, ”The mystery of the Anasazi is an open book again.” History changes fast, read more about this on RaysWeb.

80 percent chance of a megadrought lasting for decades

A recent NASA study makes scary predictions for drought: there is a more than 80 percent chance of a megadrought lasting for decades in the second half of this century. You can read more about this in the article linked to my tweet of 14 February, or in the publication in Science Advances. If this happens, how will our higher level of technology, organization, and governance help us to cope with such a threat? How will it impact life in the American southwest and the Great Plains? And how will it impact your daily life? I hope to read more about this and will keep my followers on twitter informed. Any information that you have for me will be much appreciated.

A drought in Brazil is difficult to imagine for anyone who got to know this country first, like I did, by reading the books about Colonel Percy Fawcett’s adventures in the hot and humid Amazon region. This mighty river discharges some 200,000 cubic meters per second in the Atlantic Ocean. Yet in the most prominent and wealthiest city in the country, São Paulo, the taps are starting to run dry. Many in this metropolitan region of 20 million are frightened for scary predictions for drought: the reservoir system could run dry in 2015. One of the main reservoirs that serve 9 million people is only 5 percent full.

Water could run out before the start of the rainy season, generally in November. The New York Times reports about public schools that are already prohibiting students from using water to brush their teeth. It is doubtful if that will be a structural solution. The Guardian also has an interesting article. Meanwhile, further up north, every second, those 200,000 cubic meters of water fill the Atlantic Ocean.

The U.S. and Brazil are two examples, but there are many other regions on this planet where drought will increase. In many of those countries, there will be fewer possibilities to adapt to these new challenges. We know disasters that strike unexpected and on a massive scale. We have all seen the pictures of the destruction caused by hurricanes, floodings, tsunamis, or earthquakes.

But climate change impacts develop slowly and stay much longer. Your news bulletin in the morning will not open by announcing a megadrought since it didn’t start overnight. We have never lived with climate change impacts on this scale but will have to get used to it. If the sea level rises, it will rise in all coastal areas, albeit with different speeds and implications. And if drought increases, it will be in many areas at the same time. These are enormous challenges, especially combined with more extreme weather and taking place in a globalized and urbanized world with ever more people. Huge issues indeed, for our small beautiful planet.

At the Mont des Arts (the 'art mountain') in Bruss

This is Grand Sabon, Brussels On a recent, rainy e

Avenue Louise is one of Brussels' most prestigious

Colorful reflections in Middelburg, the Netherland

After a long walk in the spectacular nature on my